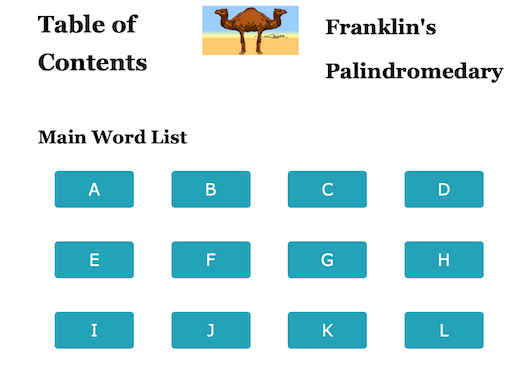 Composing palindromes requires two skills: reversing words and finding words that match parts of the reversed word. The reason for this is simple. A palindrome, by definition, is symmetrical. Every word in the palindrome must also appear in reverse. If the number of letters and numerals is even, then one half is identical to the other half when reversed. For example, "A Santa at NASA" has twelve letters, so the middle is between Santa and at. If the number of characters is odd, then the palindrome is symmetrical about the middle letter. The palindrome "A Toyota" has seven letters and the middle letter is y.

The task of reversing words can be easy for people with a good working memory and whatever neural wiring does word reversals. On the other hand, I found it challenging at the best of times, and I suspect others have the same experience. Even when I took the time to reverse words on paper, the next task almost always stopped me.

How could I find two words that would fit together and form the reversed word? Suppose the starting word is Dagon. Reverse it and split it like this: nog-ad. The left fragment is "nog" and the right fragment is "ad". It's easy enough to find words that begin with ad. Look in a dictionary. What about words that end with nog? Maybe I could dredge up one example, like snog, which is British slang. But finding three or a dozen words? No way. That is where I fail.

The Palindromedary helps with both of these tasks. It does this with some specialized word lists. The Main list looks similar to a dictionary, at first glance. But the only commonality is a list of words in alphabetical order. Here's an example.

The first word on the entry is in bold, the starting word "Dagon". Next is a word in parentheses, "nogad", the reverse of Dagon. After nogad are what I call splits. Notice that they are using the reversed word. Dagon is the starting word, so there's no need to split it. But the reverse must fit in the palindrome opposite Dagon. As far as I know, nogad is not a word. The only option is to break it up into pieces that fit with other words.

Reversed is the secret to success with the Palindromedary. Like Main it is a list of words in alphabetical order. What's different is that the first word of every entry is a reversed word. Here's what you'd see if you clicked on the nog link. 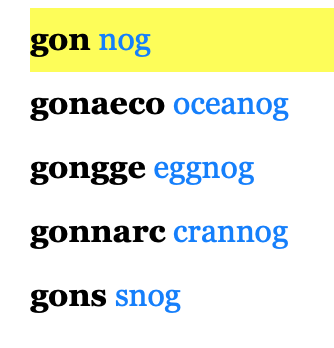 Look at the second word in each entry. They all end with nog. The bold words all begin with gon, the reverse of nog. This is how to find words ending with nog. No extreme mental effort required. Just look it up in the Reversed list.

Each entry in Reversed includes the original forward word, linked to its entry in Main. This cross-linking between the lists enables easy switching back and forth. Every list also links back to the Table of Contents.

Composing palindromes is much easier with the Main and Reversed lists. Those two are sufficient for the job. Nonetheless, the Palindromedary contains three more lists that can be helpful, or at least fun.

Ananyms are words that form a different word when reversed. Repaid diaper. Spit tips. Bun nub. The Palindromedary's Ananym list has 1,394 entries. I often start with this list for palindrome ideas. Every entry is a natural two-word palindrome, which makes a great head start on a new composition.

The Palindrome list can also be a source of inspiration. Each entry is a single word, and every word is a palindrome. A palindromic word can be at the very center of a longer palindrome, or it can be at another location, as long as it is repeated symmetrically. The list has 402 entries. Palindromes appeal to people around the world. For some reason, Finnish people love long palindromes, like saippuakauppias, a soap vendor.

Lastly, the Verb list comes in handy for composing. Every sentence needs a verb, so a list of verbs can help solve a grammatical problem quickly. The verbs are alphabetized and each verb links to the Main list. For convenience, the list also shows the reversed word. The list includes 1,086 verbs.

One of the biggest challenges in creating the Palindromedary was deciding which words to keep and which to toss. My first rule was that every word must have some minimum value for making a palindrome. Another rule is no duplicates. Along those lines, the Main list has one eccentricity. It omits duplicate entries where the possessive form of a word matches the plural. Think Herb's and herbs, but not Baby's and babies. The list retains the possessive form. You can keep or delete the apostrophe as it suits your palindrome. For example, the brand name Prada is followed by Prada's, the possessive form. The plural Pradas doesn't make sense because there is only one Prada, especially in Marfa, Texas.