How I Wrote Wasted Cadet

This is an in-depth discussion of how I composed the Wasted Cadet palindrome. I'll explain what I was thinking and why I made the choices I did.

When I first started on this palindrome, I just randomly chose the word wasted. It was pure chance, the first word that came to mind. That happens often. I just think of a word and try it in the Word Explorer field. Some don't work out, so I just try another word. Here's what happened when I tried wasted. 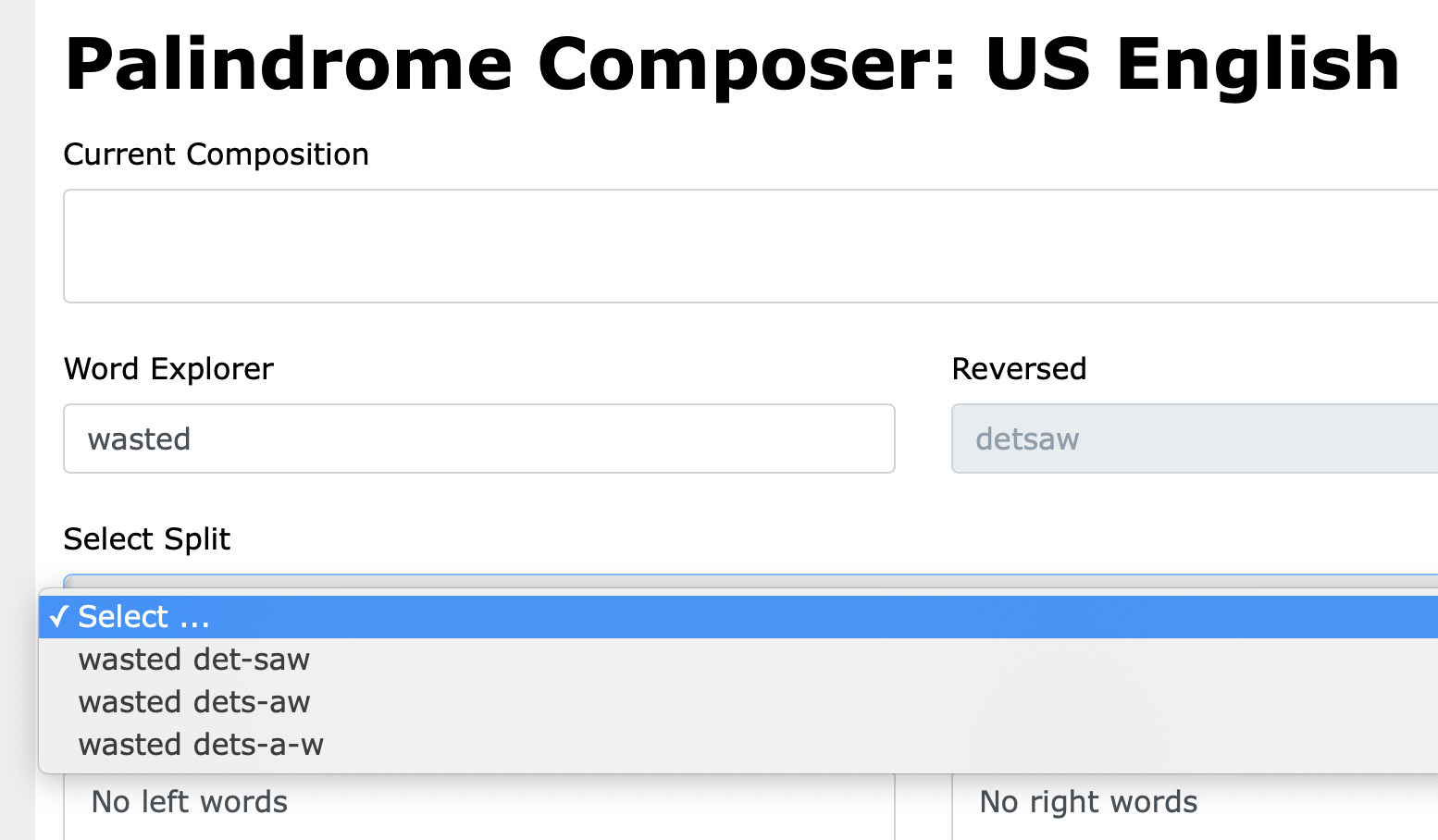 The word wasted reverses OK, and it has splits. It has several splits. I often start with the first one and work through it before trying another. At the time, I liked the first split because the right fragment is a whole word. 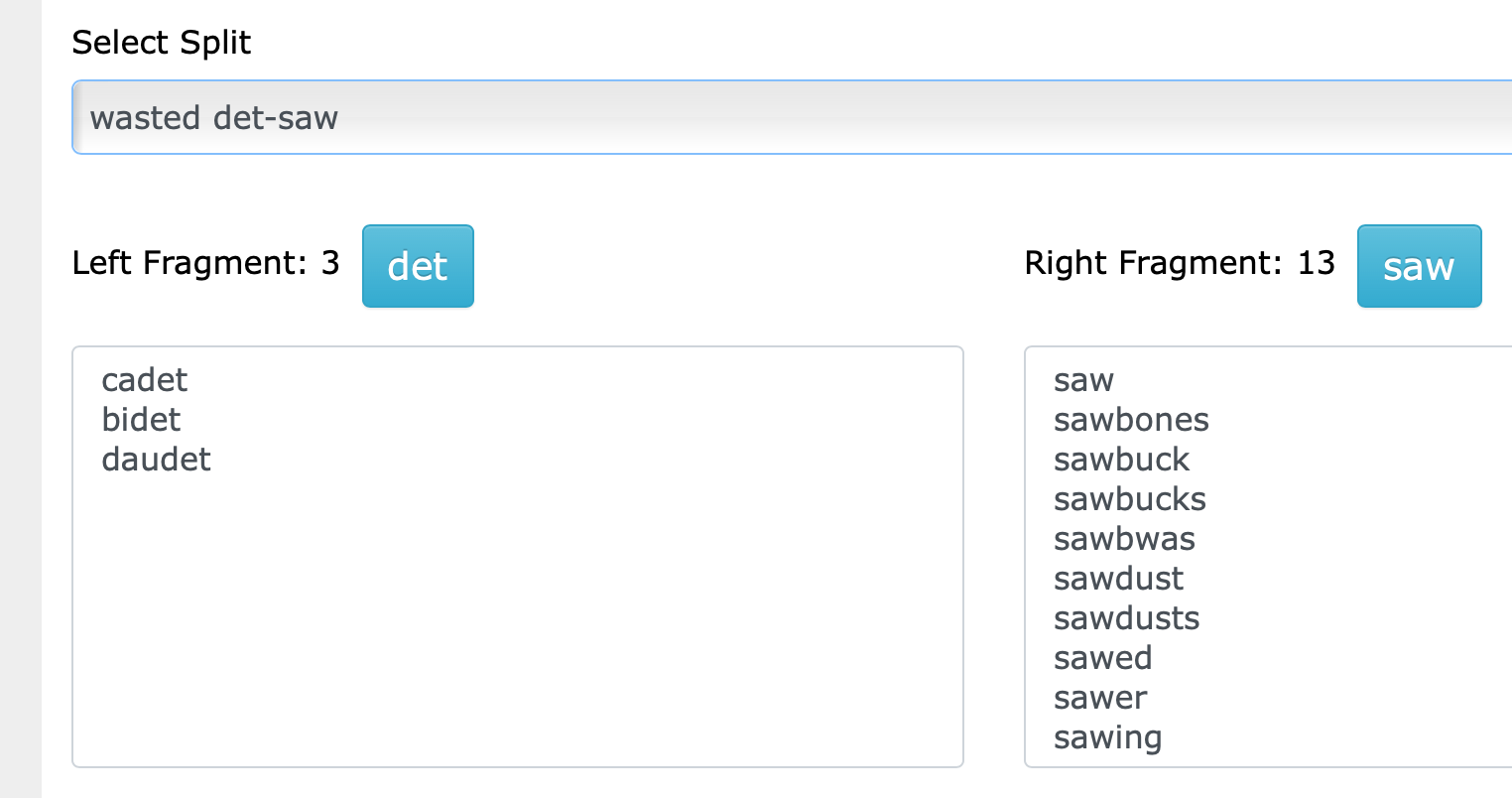 Our choices of words matching the det-saw split are limited, which can be great or terrible. On the left, we have only three words ending with det. The word cadet triggered a word association for me. I thought of military and then navy. Because of this association, I chose cadet.

Next I tried out the palindrome in the Current Composition field. This is a place to build your palindrome. One thing to keep in mind at the start, is that each word choice has two possible uses. I can write det-saw and wasted, or wasted and det-saw. Either one could lead to a good palindrome. The only way to know is to try each.

I start with wasted cadet saw. I replace the dash in the det-saw split with a space, because I want a word that ends with det and to use saw as the next word. Tab out, and I see this is not a valid palindrome.

The split, det-saw is symmetrical with wasted, but the two letters I added in the middle are not symmetrical. I can restore symmetry by adding the letter A in front of cadet. Now the letter C is in the middle. Short words are good first choices because it is easier to make everything fit. Also, "a cadet" is a grammatical phrase.

If I tab out, it is indeed a valid palindrome. The whole phrase, "wasted a cadet saw" almost sounds like a sentence. If I put a comma after wasted, it describes the cadet's state of mind and sets up a possible story. It doesn't always work out this easily, but I've had this experience more than I ever expected. To me, this says the tool does have the power to make writing palindromes easier.

What happened next was a sequence of word associations. I was stuck on the naval theme and my thoughts turned to movies of the early British navy. Unlike the officers, working sailors had very simple meals that usually included hardtack, a kind of biscuit or hard bread, and grog, a mixture of water and rum. Because refrigeration was not a thing back then, the hardtack was often infested with mealworms.

I don't know why mealworm appealed to me, but I decided to try it in Word Explorer.

When I saw the split, it was another happy coincidence. I immediately saw "Mr. Owla" with the right fragment em left over. This is an example of a happy, and lucky, accident.

Three-way splits differ from two-way splits in that the middle part is not a fragment, but a string of consecutive whole words. Now, "whole words" is a loose description because the Palindromedary includes initialisms, a modern scourge of the English language. The two words I see in this example are the exclamation "ow" and "la", where la could be from the do-re-mi song or the abbreviation of Los Angeles. None of these alternative interpretations of "owla" came into play because my mind leapt to the phrase Mr. Owla instead.

Continuing, the obvious place to put Mr. Owla is after the word saw: "a cadet saw Mr. Owla em". That means mealworm must go on the opposite end.

The whole thing looks quite good to me: mealworm-wasted, a cadet saw Mr. Owla em. I add the dash to make a compound word because I'm imagining the cadet as being drunk on something related to mealworms. This seems plausible because the most common way for sailors to eat their hardtack and grog was to put the bread into the grog. It softened the biscuit and probably killed the mealworms. And by the time the rum took effect, they didn't care much about the mealworms anyway. Extra protein.

Next I need a word to go with em, and preferably that fits the nautical theme. The first thirty words in the right fragment pane have little appeal to me, so I go to the Palindromedary by clicking the blue "em" button and start reading. As I scan the list I'm looking both at the bold words starting with em, and at the reversed words. I pay no attention to the splits because they won't matter until I choose a word starting with "em". Longer words tend to be hard to use. If the reversed is gibberish I keep scanning. I also keep in mind that the portion of the reversed word before "me" would be positioned to the left of mealworm.

When I come to embark (krabme), I think I've got a winner. On the right, em becomes embark, which fits the naval theme. On the left, krab precedes mealworm. Krab is a marketing term for crabmeat that has been molded and bonded together to resemble real crab morsels.

So I make a compound word out of krab, mealworm and wasted. And it all hangs together. It's grammatical, surreal, and paints a picture. I call that a decent palindrome. The validator says it is not original, which is correct because I wrote it in 2019 and it is already in the database.

And there you have it. It all seems so easy, right? Well, yes and no. This is exactly how this particular palindrome composition went for me using Palindrome Composer. The results came from several sources: randomness, luck, and the tools. I have had this experience repeatedly with different starting words and different palindrome results. I'm convinced the Palindromedary word lists have tilted the odds in favor of finding palindromes.

The process is not always this easy. Dead ends are quite possible, and I've hit plenty of them. Read "How Not To Write A Palindrome" if you want to see how that experience feels. Then give it a try for yourself. I think you'll be pleasantly surprised at how well you can do with just a little bit of practice.